← more from
Sunnyside Records
Get fresh music recommendations delivered to your inbox every Friday.

Live At The Village Vanguard 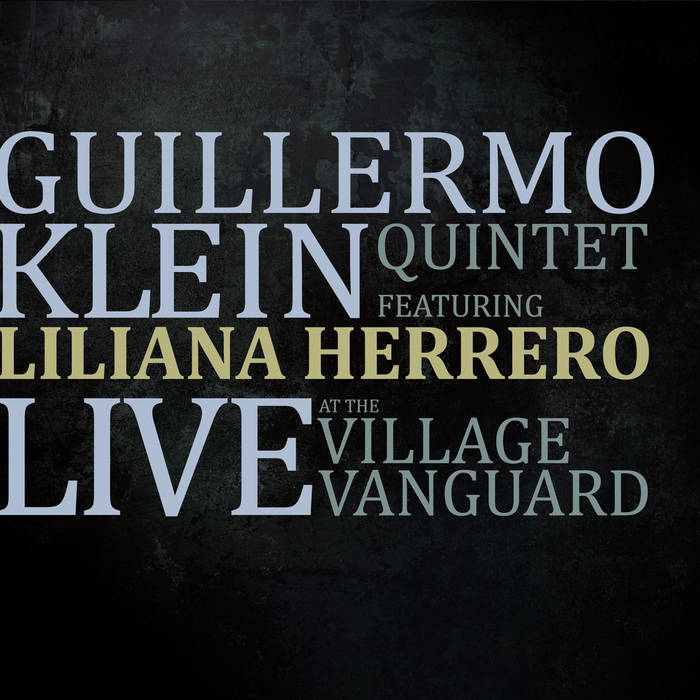 The Village Vanguard has by now become the most recognizable jazz club in the world, though few people remember that it was a haven for folk music and poetry when its doors first opened. In its first decade, it was common to hear the sounds of a Calypso band or blues guitar emanating from the legendary basement space.

It shouldn’t be surprising that a musician who has incorporated the folkloric and popular musical forms of his native Argentina with his unique jazz and classically inspired compositional style should feel so comfortable in this space. Guillermo Klein has been leading a variety of ensembles at the Vanguard for roughly a decade, most frequently the long running Los Guachos ensemble.

For his November 2012 residency, Klein wanted to present a collaboration that he had been working on for an extended period in Buenos Aires with the tremendous singer/songwriter Liliana Herrero. Herrero and Klein were joined by their accomplished Buenos Aires based ensemble, featuring trumpeter/percussionist Richard Nant, bassist Matias Mendez and drummer Sergio Verdinelli, and by pianist and regular Klein collaborator Aaron Goldberg on Fender Rhodes, to perform six nights at the club. The performances marked Herrero’s first appearances in the United States.

Assembled from recordings made during that week, Live at the Village Vanguard presents this talented ensemble as they would sound in their spirited live performances in Buenos Aires.

Though not a household name in the United States, Liliana Herrero is a well known, groundbreaking singer in Argentina. Her involvement in the political movements of the 1970s and 1980s have made her a folk hero and her fantastic recordings blending rock and folkloric music have engrained her in the lexicon of Argentinean popular music.

Klein met Herrero when he moved back to Buenos Aires in 2009. The chance encounter in an apartment building elevator led to a friendship and quickly into collaborative music making. The initial connection stemmed from their mutual appreciation of the poet/renaissance man Cuchi Leguizamon, whose work both had independently adapted. Together they performed in a variety of formats, from duo to mid-sized ensembles.

The music they make together is both varied and visceral. The melding of Herrero and Klein’s distinct musical worlds was an intense and rewarding process. The vocalist’s ruggedly beautiful voice is showcased wonderfully by Klein’s colorful arrangements of various Argentinean and Uruguayan popular songs and Klein originals.

The recording begins with a brightly performed mashup of two songs with the same title, “Golondrinas” or “Swallows,” both written about the searching spirit of the traveler, the first by the famed tango composer Carlos Gardel and the second by the late, beloved Argentinean rock star Luis Alberto “El Flaco” Spinetta. The performance is made even more special by the participation of Mendez and Verdinelli, who were members of Spinetta’s group. “Dulzura Distante” is a piece by the Uruguayan singer/songwriter Fernando Cabrera and has been a part of Herrero’s repertoire for many years. The adaptation of Cuchi Leguizamon and Manuel Castilla’s poem “Cartas De Amor Que Se Queman” into a lilting ballad is an example of Herrero and Klein’s temperaments meeting perfectly.

Originally appearing on 2005’s Una Nave, “Argentina” is a forceful composition for the ensemble, featuring the driving drum work of Verdinelli, while Messaien’s “O Sacrum Convivium-Phase” is a rhythmically diverse piece highlighting the terrific ensemble interplay. Picked by Herrero for the group, Klein’s “Moreira” is a subtle yet driving piece with the vocalist at her most dynamic. “Brazadas” is another Klein original, featuring a brilliant performance by guest saxophonist Bill McHenry.

Herrero also selected composer Sebastian Piana and lyricist Homero Manzi’s “Milonga Triste,” which is performed with heartrending honesty. The ruminative “Zamba Del Arribeño” is a piece by guitarist Juan Falú and poet Nestor Soria that Klein proposed for the group. Klein and Herrero both lend their vocals to “Se Me Va La Voz,” a slow paced, emotive piece, which is followed by “Eternauta,” a Klein composition with lyrics by Juan Sasturain, which begins subdued but builds to a powerful climax before floating to its end.

On Live at the Village Vanguard, Guillermo Klein and Liliana Herrero were able to capture a special moment at the legendary New York venue with the aid of a fantastic ensemble, a wonderful live audience and the legacy of Argentinean music, from folkloric to cotemporary.